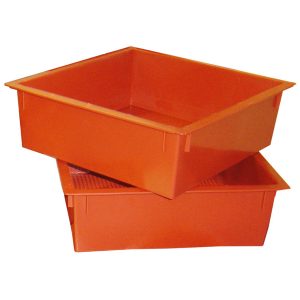 Trade Price will be shown in the basket when checking out.

The Terracotta Worm Factory Standard Plus is supplied with three composting trays. If you wish to increase you composting capacity you can buy more spare wormery trays. Spare trays are available in packs of two. You can extend the Standard Plus Wormery up to seven trays i.e. two packs of extra trays.

Do bear in mind that a greater number of worms and more waste being recycled will lead to an increase in production. Therefore you will need to ensure you regularly take and use the compost. This is to avoid huge puddles of worm waste all over the floor and the inherent health & safety issues caused by slip risks.

While the spare trays are called Terracotta they are actually made of plastic. In this case terracotta refers to the colour… not the construction material.

Once you’ve seen the difference in your plants and vegetables when using worm factory compost you will never buy compost again. Put rich nutrients back into the soil with a wormery.

This website uses cookies to improve your experience while you navigate through the website. Out of these cookies, the cookies that are categorized as necessary are stored on your browser as they are essential for the working of basic functionalities of the website. We also use third-party cookies that help us analyze and understand how you use this website. These cookies will be stored in your browser only with your consent. You also have the option to opt-out of these cookies. But opting out of some of these cookies may have an effect on your browsing experience.
Necessary Always Enabled
Necessary cookies are absolutely essential for the website to function properly. This category only includes cookies that ensures basic functionalities and security features of the website. These cookies do not store any personal information.
Non-necessary
Any cookies that may not be particularly necessary for the website to function and is used specifically to collect user personal data via analytics, ads, other embedded contents are termed as non-necessary cookies. It is mandatory to procure user consent prior to running these cookies on your website.
SAVE & ACCEPT